The Impact of Brexit – Leaving the EU 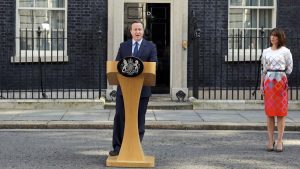 Politically and economically the 23rd June 2016 will go down as a momentous day in British history. Britain’s narrow decision to leave the EU came as a major shock to markets, institutions and politicians; none were really prepared for the result.

The Brexit vote sent an immediate shock through financial markets particularly as a rally in UK assets occurred in the week leading up to the vote, as investors became more convinced of a remain outcome. The poor market positioning amplified the surge to sell off. This sell off continued in the aftermath until UK assets looked cheap and investors returned.

The FTSE 100 index initially fell 7% within minutes of the London Stock Exchange opening, a loss in value of £160bn. The index recovered by the end of trading to a 3% fall, which was better than many predicted. The FTSE 250 index fell 7% as UK mid cap companies are mainly UK focused and will be more impacted by Brexit as compared to the multi-national corporations in the FTSE 100.

Bank of England (BoE) Governor Mark Carney made it clear to markets that the BoE stands behind the GB£ and assured markets of its intensions. Many commentators are now expecting an interest rate reduction to 0.25% in the summer along with, if needed, a further £125bn in quantitative easing (QE) to stimulate the economy. Our national deficit is likely to increase by greater borrowing, lower growth and lower tax revenue.

Growth fears prompted the flow of capital to safe haven assets such as gilts and gold. This sent share values falling and gilt yields hitting record lows. Both UK gilts and US Treasury bonds saw massive inflows pushing US bond yields down by 0.25% to 1.45% while UK 10 year gilts fell to 1.13%. European 10 year bonds are trading on negative yields. The price of a safe haven is now extremely high for the return on capital.

We expect short dated gilt yields to remain exceptionally low even if long duration bonds are now starting to worry about future inflation. A weak GB£ may see gilt yield start to rise on expectations of inflation as the cost of imported goods rise.

Leading global credit ratings agencies have warned the UK faces a ratings downgrade following its vote in favour of exiting the European Union. Standard & Poor’s, the only agency still maintaining the gold standard AAA rating for the UK, said the period of uncertainty that is likely to follow would impact economic activity. Moritz Kraemer, its chief ratings officer, said: “In view of the vote, we think that an AAA rating is untenable under these circumstances. Any exit will likely be a drawn-out process while treaties or other arrangements are negotiated between the UK and the EU regarding their future dealings,” The resulting cut in the UK AAA rating and the associated increase in government borrowing costs will impact  negatively on an economy already weighed down by high fiscal and current account deficits.

In the short term, the UK is likely to go through a period of lower growth and increased inflation. A fall in GDP growth this year and next is probable. However this growth forecast may not affect UK stock values as much as many think. The fall in the value of GB£ will increase the competitiveness of UK companies in export markets. Lower interest rates and further fiscal stimulus are equity friendly.

HSBC estimates are that UK growth will slow from 1.8% down to 1.5% in the second half of 2016 with a 0.7% growth rate in 2017 down from 2.1%. Growth in the Eurozone will be dented, strengthening the case for the ECB to continue its expanded QE programme. If there is prolonged decline in global market confidence the US Federal Reserve will find it difficult to raise US interest rates this year.

HSBC also believes that GB£ may fall even further as uncertainty of Brexit linger. They predict GB£ will fall to US$1.20 by the end of this year, leading to lower growth, higher inflation and a squeeze on living standards. They forecast inflation to climb to 1.5% by the end of 2016 and rise to 4% by the end of 2017.

In response, UBS are expecting the BoE to cut interest rates to 0.25% by August and to zero by early 2017. Barclays expect zero interest rates by September as well as a £125bn quantitative easing programme. This will support house values and mortgage take up.

The UK commercial property market has been hit by the implications of Brexit, particularly the City of London office sector. Outflows have recently forced fund groups to move their fund pricing to a defensive spread of 5%. We expect this pricing change to be reversed once inflows return. This could be aided by the fall in GB£ as UK assets are now 12% cheaper to overseas buyer but also hindered by the uncertainties of Brext.

Certainly in the short term, the leave vote will be negative for both GB£ and the UK economy. However given that the FTSE 100 comprises of 70% overseas earnings the implications for the UK equity market may not be that depressing UK stocks are cushioned by equity dividend rated being 3 times higher than gilt yields.

Currency devaluation can be beneficial to an economy with low inflation, low interest rates and a trade deficit. Inevitably exports will start to rise while imports fall. Ironically we may find our exports to Europe increase after Brexit.

It was the devaluation of GB£ that took the initial impact in the wake of the Brexit vote. As for stock markets were concerned, the greatest damage was not in the City but in Madrid, Paris and Milan where stock markets fell twice as much as in the UK. The Madrid IBEX fell 12.5% while the Paris CAX fell 8%. Britain was able to stress relieve the pressure through our currency de-valuation. No such shock absorbers were available in Spain, France or Italy. If we needed evidence of the importance of control of your national currency then this was one.

Brexit has been a massive shock but not one that should poses an on-going threat to the overall global recovery. We would expect the reality of the situation to be reflected in the recovery asset values firstly outside the UK, particularly the US and Asia, where the stock markets reacted sharply to the result but will have only modest direct consequences. In the UK and Europe it will inevitably take time for the dust to settle and in that period investors can expect plenty of volatility as UK and EU policy makers come to grips with the consequences of this historic vote.