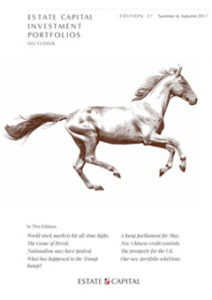 Equity markets performed well in Q1 as investors responded to evidence of an improving global recovery. Markets showed resilience in the face of the US interest rate hike of 0.25% in March. However, investors are starting to question the implementation of Trump’s stimulus policies. Investors want to see the implementation of a pro-growth agenda from the US administration.

Strong momentum from 2016 carried over into Q1 of 2017 in the US, Europe and Japan. Growth was better in the BRICs economies helped by the Chinese government’s massive stimulus in 2016 and the increased demand and price stability in commodities. The IMF forecast for world growth this year is 3.5% up from 3.1% in 2016. The forecast for 2018 is 3.6% as improvements in the BRICs, Europe and UK are offset by a downgrade in the US and China.

Despite the high quality nature of the US market, valuations have become high compared to past valuations and other markets and expectations for fiscal expansion are being scaled back. The normalisation of monetary policy by the Federal Reserve will put a squeeze on corporate profit margins. The Federal Funds Rate is expected to rise to 1.5% by the end of 2017 and to 2.25% by the end of 2018. Against this background, the US$ has already softened and bond yields have fallen.
The yields on US treasury bonds are a marker for world bond yields and if bond yields are falling then bond and gilt prices may hold. We are reducing our weightings in US equity.

In the UK, the tailwind of revenue growth of the FTSE 100 multinational companies from the post-Brexit fall in sterling has faded but the currency is still likely to stabilise in the US$1.29 to US$1.32 range. A UK slowdown has been expected due to weaker business investment and higher inflation hitting consumer spending. We are however seeing high levels of foreign investment and inflation not reaching the heights some predicted. Inflation now stands at 2.7%, above the Bank of England’s 2% target.

As far as sterling is concerned if the pound was to fall significantly, this would be because markets expect an unfavourable outcome from Brexit negotiations. If the pound strengthens then the negotiation position of the government will be seen as a success. We are happy to maintain our equity weightings in the UK.

We are positive about near term growth in the Eurozone. The strengthening of European economies has revised earnings expectations upwards. While political risk has had an impact recently, the election of French President Macron has increased optimism and lifted market confidence. The recent ruling by the European Court of Justice that clarified that the EU’s Parliament does have the power to sign free trade agreements without the need of ratification of all 27 national parliaments is good news for pending free trade treaties with economic areas around the world, including a post-Brexit UK. We are increasing our weightings in
Europe equity.

Japan is recovering at a faster pace than other parts of the developed world and is responding to ongoing fiscal stimulus. The outperformance of the Nikkei 225 standing at 19961 on the 1st June is up 17% over the last 12 months. This growth has been driven primarily by the weakness in the ¥. The Japanese economy’s reliance on the US export markets could be exposed to slower growth in the USA. We are happy to maintain our Japanese equity weightings.

We retain an underweight position on government bonds as they remain vulnerable to a shift in interest rates as central banks attempt to normalise policy with rate rises and fiscal heightening. The valuations compared to the returns on US Treasuries, UK Gilts and German Bunds are poor, but the security and inflation protection of UK index linked gilts have relevant attractions. We believe there are better valuations and yields in emerging markets sovereign debt particularly valued in their local currencies.

In the corporate credit markets, we are more attracted to high-yield than investment grade bonds. Valuations for both are not particularly compelling. Investment grade bonds are more sensitive to interest rate rises. US, UK and Eurozone high-yield bonds look more appealing particularly if duration is managed. We intend to reduce our fixed income waitings mainly held in strategic fixed interest funds but increase our holdings in UK index linked gilts.

We have held a position in commodities over the past six months that has proved unsuccessful. The market was hit by falling oil prices and reduced demand from China after the 2016 stimulus wore off. The evidence of growth and investment in global infrastructure encouraged us on the demand side but oversupply undermined this position. There still remains the issue of falling Chinese demand and further disappointment from the Trump administration. We have sold out of our natural resources holdings.

The take up in office rental in the central London office market fell by 20% in the latter half of 2016 due to Brexit uncertainty. The indications from Q1 2017 suggest that demand remains relatively weak irrespective of strong buying activity particularly from foreign investment in London. There is also an increase of new office space available which may over supply the market. While there remains uncertainty over EU passporting rights for financial services there could be a decline in office space demand.

Outside London, rents remained stable throughout 2016 and so far into 2017 as occupiers are more focused upon the domestic market. The CBRE all property initial yield index has been steady at 5.1% since last summer so property remains an attractive asset compared to gilts or cash. We remain committed to our diversified real estate holdings and will maintain our existing weightings as we see commercial property offering better yields than bonds or cash.

In terms of monetary policy, we can expect a divergence between the Fed and the rest of the developed world. The Fed is expecting to raise rates from 1% to 1.5% by the end of 2017, but interest rates elsewhere are expected to remain on hold reflecting the earlier stage of the recovery cycle in Europe and in some parts of Asia as compared to the USA. The ECB is expected to continue with quantitative easing (QE) but also begin to reduce the level of QE purchasing in 2018. The Bank of Japan has kept its short-term interest rate at -0.1 % and will maintain its QE programme of asset purchasing. The BoJ also decided to keep its 10-year government bond yield target at around zero percent. In China, while credit control measures are being implemented to restrict access to lending, interest rates are expected to fall rather than rise.

While we have enjoyed some very positive stock market returns over the past 12 months, the markets are now high and the outlook for stocks over the next 3-6 months looks increasingly uncertain. The prospect of political instability in the US, with its negative impact on business sentiment, could create short-term headwinds for the global economy despite some firm growth data. This is further compounded by the continued monetary tightening that the Chinese authorities are inflicting on their economy in order to reign in their exposed financial sector. These issues may trigger a mini slowdown.Such a scenario leaves stock markets exposed as only a continuation of the recent strong corporate profit growth will be sufficient to maintain valuations after the stock market rally of the past 12 months. After months of extended stock market returns, we have reduced our overall allocations to equity markets across our eight portfolios, until we gain more clarity whether the economic momentum of the past year can indeed be maintained.

As of 1st June 2017, our best performing funds held within our portfolios over the last 12 months have been;

The reason behind these positive returns has been the significant growth in the US economy resulting in the US stock markets reaching all-time highs. The growth in China is due to the 2016 government stimulus which we expect to start falling away, while growth in India is a result of government policy and fiscal reforms.

As far as the 27th Edition of our portfolios is concerned, eleven of the funds from the 26th Edition have been substituted while seven new funds are added. Our asset allocation remains broadly in line with that of Edition 26. However, it has have been tilted towards sectors which we feel offer better security and growth prospects over the near term. We are therefore holding higher levels of cash and have reduced our fixed interest and property exposure across the portfolios to help dampen volatility. Our general strategy is to remain very well diversified across all portfolios.

We are pleased to report that the gross performance of our portfolios in each of our eight portfolios up until 1st June 2017, as measured against the associated national Investment Association (IA) benchmark, has been quite satisfying. The relative performance is measured over six time periods from 6 months, 1 year, 2 years, 3 years, 4 years and 5 years. Five of our portfolios showed up very well producing some significant gains ahead of benchmarks over all time periods. Collectively the eight portfolios outperformed their respective benchmarks on 38 out of 44 occasions (86% competency).

Our Speculative Alpha Portfolio has for the first time produced gross returns in excess of 100% over a five year period. The actual gross returns was 102% which was 43% above the national average it is measured against over the same period. Our Defensive portfolio has fallen short of its benchmark but in some respect that is expected due to its high cash and low equity content. It did however achieve its objective of comfortably beating cash returns.