The week the world realised that deflation was a global threat 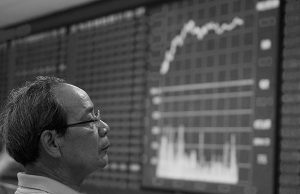 From September 2014 through to June 2015, we witnessed a remarkable stock market boom in China. This Bull Run was supported by the further opening of the Chinese stock market to international investment and by the Chinese authority’s encouragement of domestic investment. The Shanghai Composite Index started September priced at 2200 points rising to 5166 in mid-June prior to the first market correction. Over the past 8 weeks the index has fallen back to 3232, the level at which it started 2015.

On 11th August, the Peoples Bank of China (PBoC) released the Yuan from its US$ peg and devalued the currency by around 2%. The PBoC’s action followed a report confirming an 8% drop in Chinese exports and was directly aimed at increasing export demand and improving job creation.

The implication of this devaluation was that China’s economy needed the assistance of a lower exchange rate which caused shock waves in world markets. It was the day that the world realized that deflation was a global threat. Many commentators were taken aback by this move as the devaluation came at the same time as falling stock markets and a major sell off in commodity prices. The exchange rate reduction immediately created fears of a currency and export war which could see competing countries racing to weaken their currencies, driving prices lower and hitting company profits.

The Shanghai Composite Index suffered its worse one day fall since 2007 loosing 8.5% on “Black Monday” 24th August and then fell a further 7.6% the next day. Both of these falls came immediately after a week when the Index had already lost 11.5% of its value. The shock of these loses spread across the world, hitting all markets and whipped out all the gains the Shanghai Index has made during 2015. The Dow Jones Index fell 1000 points and the FTSE 100 lost 4.7% of its value.

These dramatic declines represented uncertainty, fear of deflation and panic selling. The fact this happened in August, a holiday month, where trade levels are low only made the percentages bigger.

Western markets have bounced back with stocks recovering most of the week’s earlier losses. By Friday 28th the FTSE 100 was back to 6247 having dropped to 5898.

The Chinese Authorities must take their share of the blame. They actively stoked up stock market mania in Shanghai, expecting a growing equity market could reflate the Chinese economy. Since the start of the collapse, Beijing has taken action to stabilise the market. They have tightening rules on short selling, banning large shareholders from off-loading stock and forcing national pension funds to buy domestic stock. Despite these high handed anti open market tactics or even because of them the Shanghai Index fell still further.

The falls came to an end when the PBoC stepped in with an interest rate cut of 0.25% reducing borrowing costs to 4.6%.

The events of the last two weeks have been some of the most dramatic of the last seven years with stock market losses around the world flying in the face of a slow but evident global recovery. What is more, the vast majority of economists, investment professionals and commentators did not see this coming.

It is clear that overvalued stock prices were suddenly hit by the reality of slowing economic growth and the threat of deflation.  Fear of deflation was the result of slowing growth, falling commodity prices and the devaluation in the Yuan. These events cause deflationary pressure which is the last thing a fragile global recovery needs. If Beijing was to further support its export and domestic job market with further devaluation, then the fear of deflation will intensify hitting markets further.

The devaluing of a currency exchange at the same time as cutting interest rates as the Chinese authorities have done four times this year does have dangerous consequences particularly in inviting outflows of capital. US$800bn has already left China this year with US$200bn fleeing in July. The PBoC holds US$3.7tr in foreign currency reserves, by far the world’s largest, and is burning through these reserves in order to defend its currency.

There has been real fear expressed that Beijing has in some way lost control of its plan to manage its objectives of solid growth while also deflating its credit bubble. The recent performance of the stock market should not however be mistaken for the performance of China’s real economy. Only 3% of China’s population own shares so market losses will not directly affect many. Beijing has certainly made mistakes over trying to control stock market speculation but it does still have a sound grip on the economy.

There is no doubt that China is slowing, official figures has put GDP growth at 6.8%, however many economists consider actual growth at about 4-5% pa and even this lower growth rate does not justify panic. If China manages a smooth transition to a slower more sustainable economy it is still likely to be fast enough to raise Chinese living standards and domestic consumption. To achieve this many economists are calling for a major blast of fiscal spending. In response, the Chinese government plans to pull forward a raft of spending plans scheduled for 2016 which come on top of a 13% increase in government spending for Q4.

China industrial sector has slowed this year but there is not a sign of a slump. Industrial output has increased by 6% and retail sales up an encouraging 10.5% this year. Looser monetary policy takes longer to take effect in China than it does in Western economies so this year’s interest rate reductions are starting to come through.

China’s service sector which is now bigger than its manufacturing sector is looking healthy. The property sector is improving. House prices have risen for the past three months and sales are up 18.9% year on year to July. This is particularly important as the housing market and its related industries comprise 25% of Chinese GDP. House sales values in the largest 44 cities are up 34% in the first half of 2015 compared to 2014. Land acquisition is up a massive 92% on 2014 and construction start-ups up 5.2%. The lowering of interest rates this year has aided this growth.

The general consensus is that the situation in China is manageable particularly if Beijing accepts the cost and pain of stock market losses and moves swiftly to deal with any bad debt that could spiral in China due to capital outflows and a slowing economy. Fortunately China has a great deal of slack in the system to fall back on. It has far more scope to act than Western economies through major spending projects, foreign currency reserves and interest rate cuts. The economy can still benefit from liberalising reform and the events of this summer may be the shock that improves the pace of that reform.