What would Brexit mean to Markets? 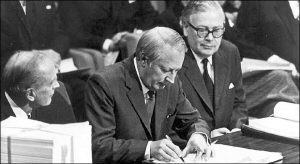 The current general consensus is that the UK will stay a member of the EU after the Referendum on 23rd June. However, the outcome for Britain if we were to vote to leave the EU could in the short term, have significant economic and market consequences. This blog post gives a summary of these issues.

Firstly given the international nature of the FTSE 100 index over 45% of the companies in this index are exposed to international factors as much as domestic. Therefore what happens in the USA or China or changes in commodity prices for example, are just as influential as the outcome of the EU referendum. The can be illustrated by the stock market falls in January.

Over the long term the implication of a ‘Remain’ vote will depend upon the economic progress of the EU and how the Eurozone develops.  Conversely the implications of a ‘Leave’ result would greatly depend upon the terms that the UK could negotiate with its European trading partners. Article 50 of the Lisbon Treaty provides for a 2 year period for such negotiations.

It would be expected that the UK could negotiate some form of modified free trade relationship. While complex, it would be in the interests of both sides to maintain good trading links. The EU is an important trading partner for the UK accounting for 44% of UK exports and 53% of UK imports in 2014/15. The UK runs a current account deficit in goods with the EU.

However, any extended period of uncertainty over the ensuing months of an exit vote would bring heightened uncertainty and market volatility to  already sensitive stock, bond and currency markets.

The general concern to equity markets would be the extent to which the UK can protect it’s free trade access to the European market whilst allowing for example, our Banks and financial institutions to passport their services to the EU rather than having to open European offices to access the single market and conduct EU business.

Both Switzerland and Norway have trade deals with the EU but for both of these countries to have free movement of goods, services, capital and labour they must adhere to the common market rules and also make regular payments to the EU budget.

The EU biggest single advantage is the barrier free common market. If border controls and tariffs were introduced then this would increase the cost of cross board business both ways.

The UK is a predominantly service driven economy and runs a service surplus with the EU. Some 40% of UK financial services are exported to the EU with London, the centre of European trading. The impact of Brexit would therefore be most significant to this market. The UK would have to negotiate to continue to implement EU single market passport rights that allow UK financial services to be provided across the EU from the UK. This passport currently allows the Swiss and American banks based in London to access the EU from the UK. If this passporting was not forthcoming, financial services businesses would have to set up subsidiaries in mainland Europe with London losing jobs and trade.

Immigration is an important issue as access to labour from the EU has been largely beneficial to the UK and aids our long term national demographics.

Net annual migration from Europe to the UK has doubles since 2012 reaching 323,000 by September 2015. It is estimated that 2.3 million EU citizens now live in Britain while 1.3 million British citizens live in the UK.

Immigrants have been fiscal net contributors to the UK budget and have supported the housing boom. However significant savings could be achieved by reductions in benefit payments.

The UK government contributes an annual net £10bn to the EU budget. Savings on this payment could reduce our national annual deficit by around 15%. Any form of free trade access to the single market such as that negotiated by Norway or Switzerland will however still entail significant payment to the EU budget.

If we were to vote to leave the EU we would have two years to negotiate a new future. In that period uncertainties will prevail.

Uncertainty is likely to undermine confidence and inward investment leading to a slowdown in growth. It is predicted that the UK could experience a 1 -1.5% fall in GDP due to Brexit. Europe would also be hurt by this.

The UK is currently running a record current account deficit of 5.2% of 2015 GDP and maintains a high dependency upon foreign capital for financing this deficit. Any deterioration in our terms of trade would particularly now, increase the risk of financial vulnerability.

£Sterling values have fallen from the start of the year and are close to their lowest value against the US$ since 2008. On a Brexit outcome, £Sterling values are likely fall further as investors take money out of the UK due to the uncertainty. We could expect the £ to fall below the $1.40 level that has until very recently held for a long time.

As the purchasing power of £Sterling falls in overseas markets it may drive an earnings upgrade for UK companies that are involved in exporting or any internationally derived income that is repatriated to the UK. This will mainly affect large cap companies in the FTSE 100.

Credit agencies may cut the UK AA+ credit score in the case of a ‘Leave’ vote meaning the Government would have to pay more for any new borrowing.

In the short term at least, foreign investment flows may come under pressure particularly if investment moves to mainland Europe in order to gain unrestricted access to the single market.

In the short term we think that the risks associated with a ‘Leave’ vote  as being;

A fall in the value of £Sterling

A decline in inward investment

A reduction in GDP growth

We would expect shares in UK banks and the London property market would be first in the firing line following a ‘Leave’ vote due to expected lower growth, higher credit impairment and asset value falls.

Overall a vote to leave the EU could bring about short term economic and financial risk, the severity of which depends upon the duration and fate of exit negotiations. After the initial risk to growth, it would be expected that the impact will reduce. The ultimate outcome is impossible to predict. A weaker £Sterling could help exporting business. A rebound in growth and share prices could happen if reality turns out to be better than expectations.

If the result is to ‘Remain’ we would expect equities to strengthen especially financials, EU exporters and see a return and uplift to GDP growth.

A ‘Remain’ vote is the most likely outcome according to polls and bookmakers. A Brexit is not priced into the UK equity market even though we have seen movement this past week. There seems plenty of evidence of corporate delays and investor sitting on cash until the outcome is known. After the result, there could then be significant cash flow back to £sterling and risk assets.