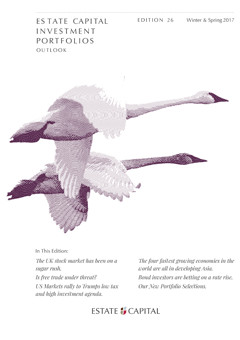 Our last Investment Outlook Report in December 2014 was cautiously optimistic about global growth. We felt that if Mario Draghi could press on with a European QE programme, opportunities within Europe would develop aided by falling oil prices and low borrowing costs. We have, I am pleased to say benefited from these events.

Since the start of 2015, equity markets have responded well to the loose money supply, low interest rates, and low energy costs. After a strong start to the year, global equity markets have now been affected by the uncertainty over Greece and the impact of a potential US Federal Reserve rate rise. As a result much of the early Q1 2015 equity gains have been given up, if only temporally. Investors in markets such as Europe, Japan, China and India will have overall enjoyed significantly higher rewards than other economies; however, prospects going forward may be less attractive. Generally, global corporate earnings estimates, with the exception of Japan, have taken a step backwards and valuations are less attractive particularly in the US. Average US P/E ratios are the highest recorded in the post- war period and are broadly based across sectors leaving little in the way of undervalued assets. Principle drivers of equity markets are central bank stimulus and the hunt for attractive yields. Along with our concerns over the highly valued US market, equity and now bond markets are vulnerable to any unexpected bad
news and with it act disproportionally.

As of 17th June, our best performing funds held within our portfolios over the last 12 months have been;

The main reasons behind these positive returns have been the significant growth in the US, China and UK Mid Cap markets.

While our poorest performing funds were;

The main reasons for these disappointing performances were the general sell off in bonds and emerging markets. We were particularly disappointed at Kames High Yield Bond as this fund has served us very well for many years.

As far as the 23rd Edition of our portfolios is concerned, 15 of the funds in the 22nd Edition have been substituted. Our asset allocation remains broadly in line with that of previous editions in order to retain the portfolios risk profile. However, they have been tilted towards sectors we feel offer better prospects going forward. We are holding greater levels of cash and property across the portfolios in order to help dampen volatility.

Despite concerns, we still believe that the general economic and monetary environment remains supportive of risk assets relative to both fixed interest and cash. Our strategy is to remain overweight in equity and UK property. We have increased our exposure in the UK, Japan and Europe as well as specialist areas such as infrastructure, financials, biotech and healthcare. We have maintained our holdings in India and China but reduced our exposure to the USA. We have significantly reduced our equity holding in emerging markets in general. While geographic uncertainties prevail, we have extended our exposure to specialist sectors, particularly UK property, listed infrastructure, financial institutions and healthcare research and provision. As far as fixed interest securities are concerned, we are cautious of the potential rise in US interest rates and while not imminent, the return of inflation. We have maintained our holdings in UK corporate bonds and high yield bonds as they represent reasonable value. However we have reduced our overall fixed interest holdings and transferred a proportion of the portfolios to UK property funds that are offering both better yields and growth prospects. We are negative about Brazil, Russia, gold, commodities and European sovereign bonds and so do not hold any direct holdings in our portfolios.